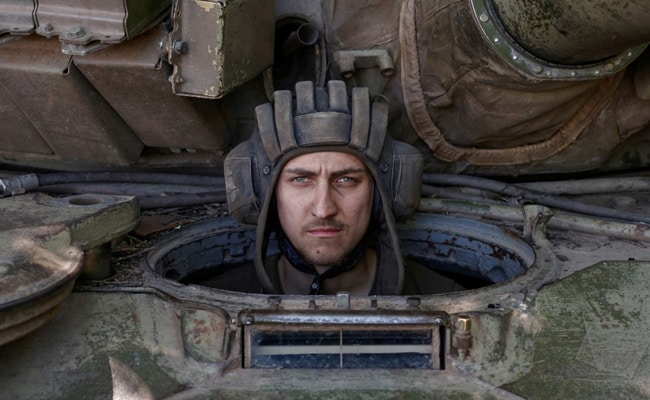 A Ukrainian serviceman looks on from inside a tank at a position in Donetsk region.

Russian forces tightened their grip on the eastern Ukrainian city of Sievierodonetsk and cut off the last routes for evacuating citizens, a Ukrainian official said on Monday — a scene that echoed Moscow’s assault on Mariupol last month.

Amid heavy Russian bombardment, regional governor Sergei Gaidai said on social media that all bridges out of the city had been destroyed, making it impossible to bring in humanitarian cargoes or evacuate citizens.

He said some “access” remained and part of the city was still under Ukrainian control.

“They have the ability to send the wounded to hospitals, so there is still access,” he told Radio Free Europe/Radio Liberty’s Ukrainian service. “It’s hard to deliver weapons or reserves. Difficult, but not impossible.”

Ukraine has issued increasingly urgent calls for more Western heavy weapons to help defend Sievierodonetsk, which Kyiv says could hold the key to the battle for the eastern Donbas region and the course of the war, now in its fourth month.

“The battles are so fierce that fighting for not just a street but for a single high-rise building can last for days,” Gaidai said earlier. He is governor of the Luhansk region that includes Sievierodonetsk.

Russian artillery fire pummelled the Azot chemical plant, where hundred of civilians were sheltering, he said.

“About 500 civilians remain on the grounds of the Azot plant in Sievierodonetsk, 40 of them are children. Sometimes the military manages to evacuate someone,” he said.

Ukraine’s account of civilians trapped in an industrial plant echoed the fall of Mariupol last month, where hundreds of civilians and badly wounded Ukrainian soldiers were trapped for weeks in the Azovstal steelworks.

Russia has denied targeting civilians in what it calls a “special operation” to restore Russian security and “denazify” its neighbour. Ukraine and its Western allies call this a baseless pretext for an invasion which has killed thousands of civilians and raised fears of wider conflict in Europe.

More than 5 million people have fled the assault and millions more are threatened by a global energy and food crisis due to disrupted gas, oil and grain supplies from Russia and Ukraine. Western nations are divided over how best to end it.

Gaidai said a six-year-old child was among those killed in the latest shelling of Lysychansk. Officials in the Russian-backed separatist-controlled Donetsk region said at least three people, including a child, were killed and 18 were wounded by Ukrainian shelling that hit a market in Donetsk city.

The Donetsk News Agency showed pictures of burning stalls at the central Maisky market and several bodies on the ground. The news agency said 155-mm calibre NATO-standard artillery munitions hit parts of the region on Monday.

Reuters could not independently verify either report.

After failing to take the capital Kyiv following the February 24 invasion, Moscow focused on expanding control in the Donbas, which comprise Luhansk and neighbouring Donetsk and where pro-Russian separatists have held territory since 2014, while also trying to capture more of Ukraine’s Black Sea coast.

Along the front line in the Donbas, the fighting poses a new threat as the weather warms, with shelling and rocket fire setting fields on fire and destroying ripening crops.

Lyuba, a resident in the Ukrainian-held pocket of the Donbas near the front, watched a fire blazing along the fields but said she was not planning to leave. “Where can I go? Who is waiting for me there?” she said. “It’s scary. But it is what it is.”

“We are waiting for a decision,” he said, adding that Western defence ministers would meet on Wednesday in Brussels.

Russia issued the latest of several recent reports saying it had destroyed US and European arms and equipment, hoping to send the message that delivering more would be futile.

The defence ministry said high-precision air-based missiles had struck near the railway station in Udachne northwest of Donetsk, hitting equipment that had been delivered to Ukrainian forces. There was no immediate word from the Ukrainian side.

Moscow has criticised the United States and other nations for sending Ukraine weapons, threatening to strike new targets if the West supplied long-range missiles.

Ukraine Has Lost A Quarter Of Its Arable Land To War: Agriculture Ministry

US, Allies Would Respond "Quickly" To North Korea If...: Blinken Warns