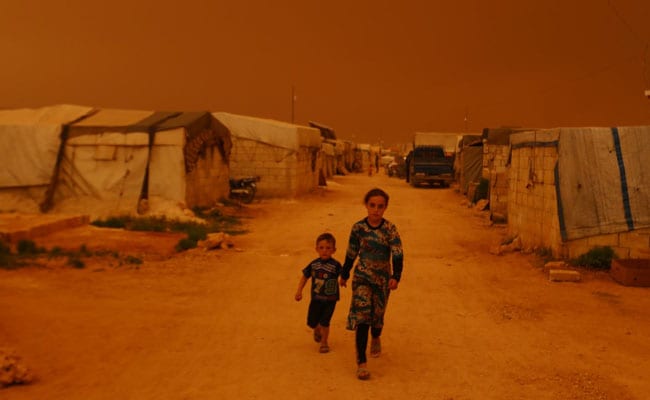 Displaced children walk past tents during a dust storm near the Turkish-Syrian border.

An unprecedented 36.5 million children were displaced by conflict, violence and other crises by the end of 2021, the highest number since World War II, the United Nations Children’s Fund (UNICEF) reported Friday.

The figure, which increased by 2.2 million in 2021, includes 13.7 million child refugees and asylum-seekers and nearly 22.8 million internally displaced due to conflict and violence, according to the statement issued by the agency.

Children displaced by climate and environmental shocks and disasters, and those displaced in 2022, including by the Russia-Ukraine conflict, are not included in the report.

The record number is a direct result of cascading crises, including “acute and protracted conflicts such as in Afghanistan, and fragility in countries like the Democratic Republic of the Congo or Yemen — all exacerbated by the destructive impacts of climate change,” the statement added further.

UNICEF Executive Director Catherine Russell said she hopes the alarming number will move governments to prevent children from being displaced and ensure the access of those displaced to education, protection and other critical services.

Unaccompanied or separated children, in particular, are facing a high risk of trafficking, exploitation, violence and abuse, the agency said, adding that globally, children make up approximately 28 percent of victims of human trafficking.