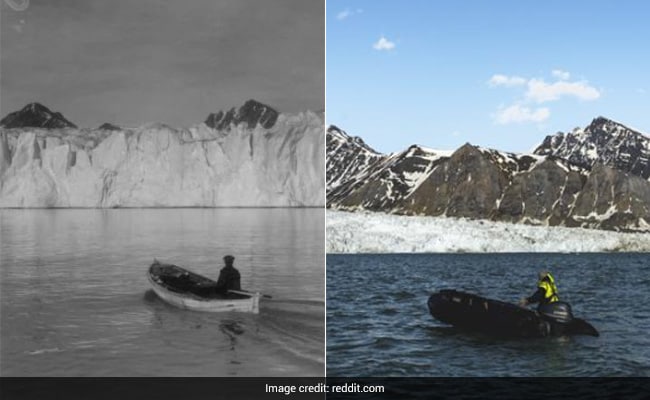 The photographer recreated a 1918 photo of the glacier.

A photographer has recreated a 1918 photo of a glacier in order to highlight how much of it has disappeared over the last century.

In a viral Reddit post, photographer Neil Drake shared a photo he took that showed just how much the Blomstrandbreen Glacier, which is located in a bay in Svalbard, an island far north Norway, has retreated. Mr Drake also shared another photograph that was taken at the same time of the year in 1918.

Speaking to Newsweek, Mr Drake explained that in the original photo, one can tell it’s summer because it’s daylight, and in the winter it’s complete darkness in the Arctic. “Second, the fjords are frozen throughout most of the year. You can only access them by boat in summer when the sea ice melts. Third, the mountain tops in the original photo don’t have snow on them, which would only be the case in the peak of the warmest summer months.” he said.

Mr Drake added that the comparison between the two pictures of the Blomstrandbreen Glacier is one of the most dramatic he has ever seen. “I knew I was part of something more important than just capturing a photo. It was part of ensuring people are having these important conversations about how we are impacting the climate,” he told the media outlet.

Further, the photographer said that the photos are meant to make people uncomfortable. He noted that some of the Reddit comments read that the post “ruined” their day. “That is why I posted it. To make people think ‘Ok, maybe this climate change thing is read,'” Mr Drake added.

As per Newsweek, increasing temperatures due to greenhouse gas emissions are causing sea ice and glaciers across the globe to retreat at an unprecedented rate. Arctic sea ice is melting at a rate of almost 13% every ten years, and the oldest and thickest ice in the Arctic had too declined by 95% over the last 30 years.

Citing World Wildlife Fund, the media outlet reported that if emissions continue to rise unchecked, the Arctic could be ice-free by 2040, which could lead to real consequences such as rise in sea levels, flooding in coastal communities and extinction of animals. Humans could also be impacted by food shortages, heat waves and increasingly unpredictable weather.