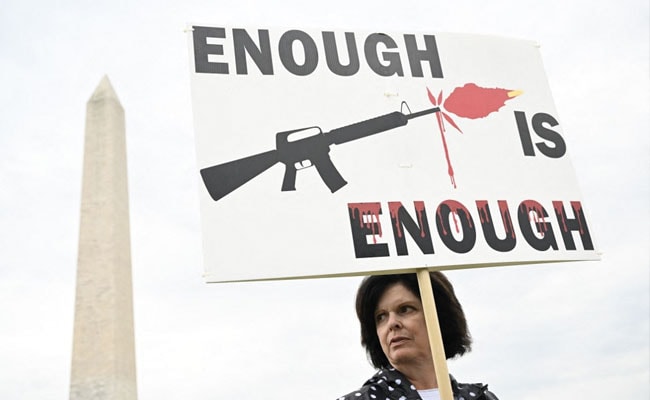 Gun control advocates took part in a “March for Our Lives” protest on June 11.

Two horrific massacres in recent weeks have succeeded in bringing Democrats and Republicans close to the most significant federal legislation addressing US gun violence in three decades.

Twenty senators — 10 from each party — reached a deal Sunday to put through legislation that would tighten some rules on gun sales and put more resources toward mental health treatment.

The 10 Republicans are just enough to ensure that the legislation could overcome Senate rules that have allowed the party since the 1990s to block almost every single measure aimed at controlling the flood of personal firearms on the US market.

Their agreement comes less than a month after two shocking mass shootings: first, when 10 African Americans were killed on May 14 at a supermarket in Buffalo, New York, and then less than two weeks later when 19 children and two teachers were shot and killed at an elementary school in Uvalde, Texas.

Those tragedies also brought into focus smaller, but more frequent instances of gun violence across the United States.

Chris Coons, a Senate Democrat who led the chamber’s bipartisan effort, said the legislation could be introduced within days and possibly passed in early July.

“In the wake of the horrifying recent shootings in Buffalo, Uvalde, and across the country, Americans have demanded that the Senate take meaningful steps forward on this issue,” said Coons.

“This framework will save lives. If it becomes law, it will lower the risks of mass shootings, of lethal domestic violence incidents, of violence we see too frequently on our streets.”

The senators’ agreed measures are modest, and far short of what US President Joe Biden called for following last month’s tragic killings.

– Enhanced background checks for people under 21 buying a gun, allowing a review of juvenile crime and mental health records

– Funding and incentives for states to pass “red flag” laws to keep guns out of the hands of people deemed a danger to themselves or society, and perpetrators of domestic abuse

But they did not approach demands from gun control advocates, including an outright ban on assault rifles, as was in place from 1994 to 2004, a ban on gun sales to people under 21, mandatory waiting periods in all gun purchases, and bans on high-capacity magazines.

Both the Buffalo and Uvalde shootings were by 18-year-olds using high-powered AR-15-style semi-automatic rifles.

Moreover, whatever gains that come with the legislation could be dealt a setback by a Supreme Court ruling due this month that could overturn state restrictions on carrying guns in public.

Even so, gun control advocates cheered the measures, recognizing the potential for a significant shift towards breaking the gun industry’s stranglehold.

“We applaud this historic step forward for gun violence prevention — one born out of the recognition that this nation needs change and action to save American lives from preventable gun violence,” said Kris Brown, president of the Brady: United Against Gun Violence group.

Yet supporters were not fully confident the measures will pass, knowing that the legislation could be blocked if fewer than 10 of the Senate’s 50 Republicans support it.

Working in their favor is that none of the 10 Republicans who agreed to the deal Sunday are standing for reelection in November. Four are retiring, and five won’t face reelection until 2026; one other faces reelection in 2024.

The 20 senators “are committed to each other and to this project,” said Coons.

But the National Rifle Association, which has wielded powerful influence over Republicans for decades, made clear their fundamental opposition.

“NRA will continue to oppose any effort to insert gun control policies, initiatives that override constitutional due process protections and efforts to deprive law-abiding citizens of their fundamental right to protect themselves into this or any legislation,” the group said.

David Hogg, leader of anti-gun violence group March For Our Lives and himself a school shooting survivor, called for action to counter the NRA’s political pressure.

“We’re going to need a lot of gun owners to speak out and let these Republican senators know that they are supported, that the NRA speaks only for the NRA and not the majority of responsible, voting gun owners,” he said.