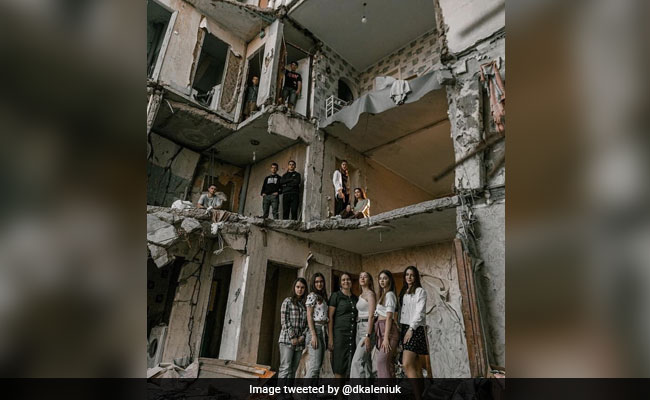 Stanislav Senyk intended to capture the “very important story” of about 40 graduating seniors.

A group of high school students in war-torn Ukraine chose destroyed buildings and wrecked vehicles as a frightening background for a group photo.

Daria Kaleniuk, an executive director at Anti-Corruption Action Centre in Ukraine, shared the photo on Twitter on Monday.

According to Reuters, the photographer who was capturing the photos was Stanislav Senyk. The 25-year-old told the news agency that after experiencing the traumas of the war firsthand, he intended to capture the “very important story” of about 40 graduating seniors from schools.

“And I’m sure it was very important to capture that in the memory,” he was quoted as saying by the New York Post. “And 10-15 years from now, when they have their own children, they can show those pictures to them,” the outlet further said.

There are a total of 13 students in the viral photo. With damaged and destroyed buildings in the background, the students can be seen confident and fearless from their faces.

Another wrote, “These photos they keep taking at their bombed-out schools (prom, graduation) are a powerful reminder of what they’ve lost. I saw the fight at a sports arena and was reminded that even as they’re defeating Russian attacks, they’re often having to destroy their own buildings.”

Meanwhile, Russian forces and their separatist allies are carrying out a major assault on Ukraine’s eastern Donbas region, with fierce fighting taking place for the city of Severodonetsk.

Ukraine’s soldiers claim to have killed numerous Russian military commanders since Russia sent troops into Ukraine on February 24, but the precise number is unknown since Russia remains silent about its losses.