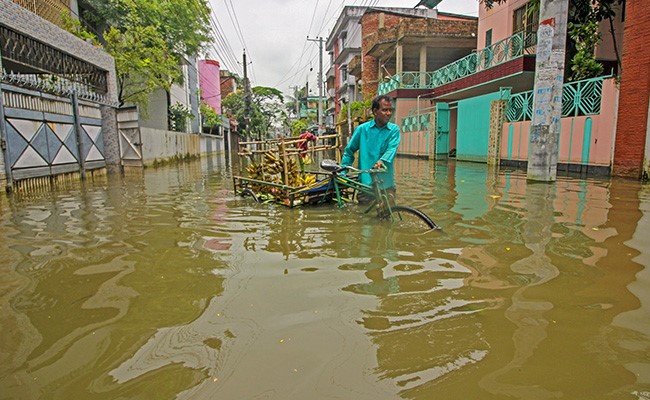 Bangladesh Floods: Much of Bangladesh’s northeast is underwater and the situation could worsen

Floods are a regular menace to millions of people in low-lying Bangladesh, but experts say climate change is increasing their frequency, ferocity and unpredictability.

Much of the country’s northeast is underwater and the situation could worsen over the weekend with more heavy rains forecast.

Authorities suspended imminent high school graduation tests across the country, with hundreds of classrooms now being used as makeshift shelters for those whose homes have been submerged.

“People have taken shelter on their boats. We have deployed the army and we are trying to evacuate them.”

Hossain said authorities had sent the military to flood-hit rural towns, with soldiers going door to door handing out aid and rescuing people from rising tides.

Heavy rains that began last week in Bangladesh and parts of neighbouring India fed into rivers that burst their banks downstream, said Arifuzzaman Bhuiyan of the government’s Flood Forecasting and Warning Centre.

He added that the Surma river, Sylhet region’s largest waterway, was more than a metre (three feet) higher than normal.

“This is one of the worst floods in the region’s history. The situation will worsen in the next three days,” he said.

Much of the area is currently without electricity and internet, Sylhet-based Bangladeshi journalist Mamun Hossain told AFP from the region.