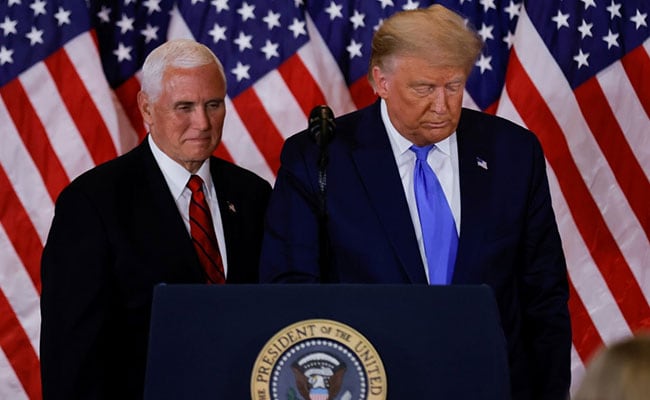 Trump wanted Mike Pence to do something no other vice president has ever done, the panel said. (File)

Donald Trump pressured his vice president to go along with an illegal plot to overturn the 2020 US election and whipped up a mob that put his deputy’s life in danger when he refused, congressional investigators and former administration aides said Thursday.

The House committee probing last year’s attack on the US Capitol detailed how the former president berated Mike Pence for not going along with the scheme both knew to be unlawful — even after being told violence had erupted as Congress was meeting to certify Joe Biden’s victory.

At its third public hearing into the January 6, 2021 insurrection, the panel detailed a “relentless” pressure campaign by Trump on Pence — as cornerstone of a criminal conspiracy to keep the defeated president in power.

“Donald Trump wanted Mike Pence to do something no other vice president has ever done: the former president wanted Pence to reject the votes and either declare Trump the winner or send the votes back to the states to be counted again,” panel chairman Bennie Thompson said.

Trump’s lawyer John Eastman was the architect of the “nonsensical” plot, said committee vice-chair Liz Cheney, pushing the scheme aggressively despite knowing it to be unlawful.

The committee showed testimony from Pence’s general counsel Greg Jacob saying Eastman admitted in front of Trump two days before the riot that his plan would violate federal law.

A desperate Trump had turned to Pence for help after dozens of legal challenges against the election were dismissed in courts across the land.

The defeated president used rally speeches and Twitter to exert intense pressure on his deputy to abuse his position as president of the Senate and reject the election results.

Members of Trump’s family were in the Oval Office on January 6 when Trump had a “heated” phone call with Pence, according to first daughter Ivanka Trump’s deposition, aired at the hearing.

She said Trump took “a different tone” than she’d heard him use before.

Nicholas Luna, a former assistant to Trump, recalled in his own deposition: “I remember hearing the word ‘wimp.'”

During his “Stop the Steal” rally later that day, Trump referenced Pence numerous times as he told his supporters to march on the Capitol and “fight like hell.”

Trump’s original speech didn’t mention Pence but he ad-libbed to berate his vice president in a move Democratic committee member Pete Aguilar said helped incite the insurrection and the threats against Pence.

But Pence resisted, releasing a letter to Congress saying the vice president had no “unilateral authority” to overturn election counts.

Aguilar said an informant from the neofascist Proud Boys told the FBI the group would have killed Pence given the opportunity.

The California congressman said the mob storming the Capitol came within 40 feet (12 meters) of Pence and to “make no mistake about the fact that the vice president’s life was in danger.”

Trump’s chief of staff Mark Meadows told him about the violence erupting at the Capitol but the president tweeted anyway that Pence did not have the “courage” to overturn the election, aides told investigators in videotaped depositions.

Immediately after the tweet, the crowds at the Capitol surged forward, the committee said.

The mob threatened to hang Pence for failing to cooperate as they stormed the Capitol, even erecting a gallows in front of the building.

“What the former president was willing to sacrifice — potentially the vice president — in order to stay in power is pretty jarring,” Aguilar said.

The panel aired a video clip of a rioter saying he would “drag people through the streets” if Pence refused to overturn the election.

The committee also heard from retired federal judge J Michael Luttig, who testified that the United States would have been plunged into “a revolution within a paralyzing constitutional crisis” had Pence folded under Trump’s pressure.

Luttig, a renowned conservative legal scholar, had advised Pence at the time that his role in overseeing the ratification of the election was purely ceremonial — and that he had no power to oppose the result.

“There was no basis in the constitution or the laws of the United States at all for the theory espoused by Mr Eastman. At all. None,” Luttig said.

Trump reacted to the hearing by demanding that he receive “equal time” on the airwaves to lay out his bogus theory that the election was stolen — but opponents pointed out that he has not taken up the committee’s invitation to testify.

Alaska kids served floor sealant instead of milk at daycare

“Trying To Look Like Animals”: Taliban On Women Without Hijab

"Trying To Look Like Animals": Taliban On Women Without Hijab