Three Men In US Try To Steal $4,200 Liquor Bottle, Only To Get Away With Cheap Decoy 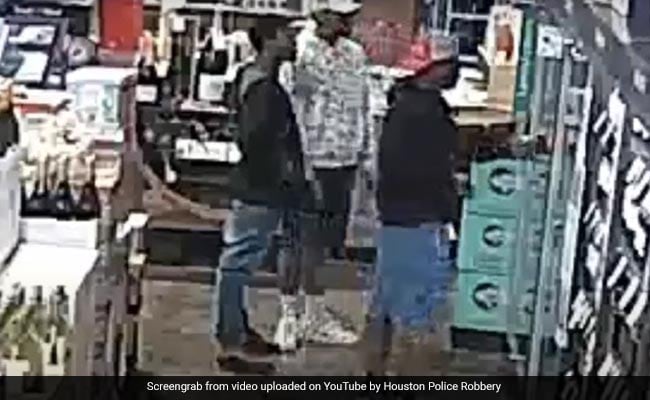 The thieves took a decoy bottle that was worth far less than $4,200.

In a bizarre incident, police in Texas, US, are searching for three men who were caught on camera robbing a liquor store and fleeing with a cheap decoy alcohol bottle which they presumably believed to be real.

The Houston Police Robbery department informed that the incident took place on May 23. CCTV footage from the liquor store showed the three unidentified men walking into the shop and crowding around a locked display case that contained expensive bottles of alcohol.

As per the police, the group of men inquired about a $4,200 bottle of alcohol that was on display, at which point an employee came over and unlocked the cabinet. The worker took out the bottle to show the customers, which is when one of the men snatched the bottle from the employee before running out of the store.

Then, a second man in the group also picked up another box of the same alcohol and made his way towards the exit. However, after discovering the box was empty, the man dropped it before exiting the store.

As per Fox News, the store said that the bottle of alcohol that was taken by one of the men was a decoy bottle that was worth far less than $4,200.

The three men have not yet been caught, therefore, the police have asked for the public’s assistance in finding them. The cops described the suspected robbers as three Black men, one wearing a white pullover, black shorts, a white cap and white shoes. Another was wearing a black Nike pullover, dark shorts and blue shoes, while the third had a visible goatee and wore a black jacket and blue jeans.

The police department is also offering a cash reward of up to $5,000 for any information leading to an arrest.