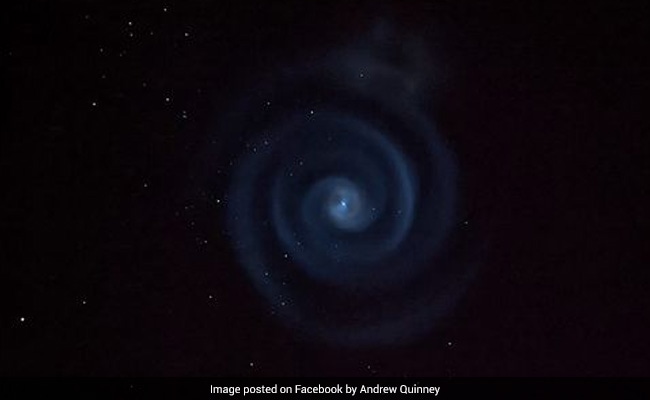 The blue spiral appeared in the night sky above New Zealand on Sunday.

The stargazers in New Zealand were surprised by strange, spiralling light formations in the night sky on Sunday night. The photos were widely shared on social media, with many New Zealanders comparing them to some sort of “wormhole”. But experts said these “wacky looking clouds” were caused by Falcon 9 rocket carrying a Globalstar DM15 satellite.

The extraordinary sight was first captured by residents of Nelson, a city in New Zealand’s North Island, and was visible 750 km south to Stewart Island.

“Does anyone know if there was a satellite put into orbit over NZ tonight or maybe an Australian satellite, saw something like the picture I posted at about 1920hrs tonight looking slightly west at a high elevation Rangiora Canterbury,” Facebook user Inch Justin posted in Astronomy in New Zealand group.

“The picture I have posted up is just an example of what I saw. Didn’t manage to get a picture of it just grabbed my binos and watched what appeared to be a satellite in the middle of the spiral heading north at a great rate of knots,” the user further said.

Users flooded the group with comments. “Yes, several of us saw it from Hawke’s Bay, near the tail of Canis major, then moving north east,” a user commented.

Prof Richard Easther, a physicist at Auckland University, explained the reason behind the phenomenon. Clouds of that nature sometimes occurred when a rocket carried a satellite into orbit, he told The Guardian.

“When the propellant is ejected out the back, you have what’s essentially water and carbon dioxide – that briefly forms a cloud in space that’s illuminated by the sun,” Professor Easther said. “The geometry of the satellite’s orbit and also the way that we’re sitting relative to the sun – that combination of things was just right to produce these completely wacky looking clouds that were visible from the South Island.”

The New Plymouth Astronomical Society said on Facebook that it was “most likely a “fuel dump” or “exhaust plume” from a SpaceX rocket launch”, as similar effects have been seen before.

According to Professor Easther, the rocket in question was Falcon 9, which SpaceX used to send a satellite into low-earth orbit on Sunday.

How To Fix Automatic Door Locks On A Car – Professioanl Guide

How To Fix Automatic Door Locks On A Car - Professioanl Guide