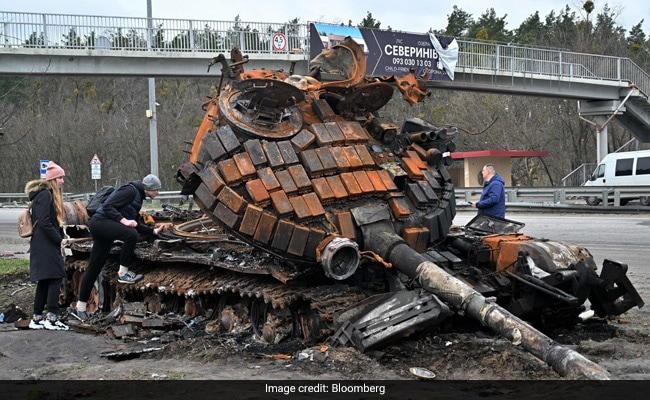 Russia has revived its advances after appearing to slow down in the past.

Russia is scraping across the country to find manpower and weapons, including old tanks based in the Far East, having used up much of its military capacity in the first 100 days of its invasion of Ukraine, according to senior European officials with knowledge of the situation on the ground.

As a result, Russia may be only a few months from needing to slow operations for a major regroup, these people said, speaking on condition of anonymity to discuss matters that aren’t public. The Kremlin might also be forced to announce a mass mobilization in order to call up soldiers to continue the fight, the people said, though that’s something President Vladimir Putin so far has been reluctant to do as it would amount to a public admission the war isn’t going as planned.

Russia’s troubles may not come soon enough to provide relief to Ukraine’s beleaguered forces in the eastern Donbas area. Massively outgunned by Moscow, Kyiv’s forces are losing 100 or more a day, Ukrainian officials say, and have had to slowly give up ground around the cities of Sievierodonetsk and Lysychansk. If Russia takes those two – particularly the more strategic city of Lysychansk still under greater Ukrainian control – it would effectively seize the entire Luhansk region, achieving one of the goals Putin set out at the start of the war.

But Russia’s progress remains slow and mostly limited to Luhansk even after it focused efforts on the larger Donbas following the failure of its attempts to take Kyiv and other major cities early in the war. Combined with signs the Kremlin could be running short of men and materiel, that’s led some European officials to conclude it could be months from seeking some kind of a cease-fire that would allow it to cement what gains it’s been able to make so far.

“Russia probably needs at least another 2-3 months to take big towns in Donbas, such as Slovyansk and Kramatorsk,” according to Indrek Kannik, director of Estonia’s International Centre for Defence and Security. “That’s when Russia will reach its capacity and will push for a deal on that basis.”

While the conflict now seems to have settled into a war of attrition, a senior Eastern European official said the stalemate isn’t likely to extend into the long term and warned a crunch point could be a few months away.

To be sure, Russia has revived its advances after appearing to slow down in the past, and Putin’s decades-long military buildup has left it with vast inventories of weapons and ordnance. “The situation at the front now is difficult,” Ukrainian presidential adviser Mikhailo Podolyak wrote on Telegram on Tuesday. Russia, he said, “has accumulated an awful lot of weapons.”

Steadily increasing their calls for more weapons in recent weeks, Ukrainian officials have given no public hint they think Russia’s advance could soon run out of steam. Commander-in-Chief Valeriy Zaluzhnyi said Sunday that Russia now has tenfold superiority in artillery, while President Volodymyr Zelenskiy has said the fight for Sievierodonetsk will determine the fate of Donbas.

Still, Russia has lost a large amount of tanks and armored personnel carriers and has been forced to dip into stocks of older equipment, including decades-old T-62 tanks from its Eastern Military District. Some of the aging arsenal could be devoted to security and other uses behind the lines, as it would quickly run into trouble if deployed at the front.

“Russia continues to deploy insufficiently prepared volunteer and reserve forces to reinforce its ongoing operations,” the Washington-based Institute for the Study of War said in a report Tuesday, noting social-media reports of reservists training on D-20 artillery and T-80BV tanks dating from the Soviet era.

Publicly, Russian officials deny any difficulties sustaining the war effort and vow to continue until their goals are achieved, though they don’t specify what those are. In private, some Kremlin insiders have suggested they expected western resolve to flag before Putin’s does.

Brief comment on Russian equipment. I think we will see more T-80BV, BMP-1, and MT-LBs as they dig into storage to replace losses. T-62Ms for reservists and perhaps LNR/DNR mobilized units. I suspect the main challenge will be replacing lost BMP-2 IFVs, hence BMP-1s.

If the Kremlin’s manpower and equipment issues become severe enough to force it to push for some kind of cease-fire deal, that would confront Ukraine and its allies with the painful choice between giving up territory for an end to the fighting or continuing a brutal war amid growing concerns over surging energy and food prices and other fallout. For now, the US and UK, among others, are supporting Zelenskiy’s desire to keep fighting even as some politicians in France and Germany discuss the merits of some kind of truce.

“I am afraid of these premature peace talks or cease-fire because this is exactly how it was in Donbas: let’s freeze the conflict here. Everybody stays where they are and let’s not move on,” Estonian Prime Minister Kaja Kallas said last week in an interview. “But what we saw with Georgia, with Crimea, with Donbas is that there will be a pause of one year or two years, and then everything will continue and on a much broader scale.”

Being straightforward – to end the war we need heavy weapons parity:

Contact Group of Defense Ministers meeting is held in #Brussels on June 15. We are waiting for a decision.

“We have to focus right now on the military aid,” she said. “If the decisions are made to send heavy weaponry, they should be sent now, not in December.”

In the event Ukraine succeeds in mounting a counteroffensive and pushing Russian forces back, that would present Europe with new dilemmas, she said.

“So long as Ukraine is defending their country right now, then sending weapons is fine for everybody,” she said. But if Kyiv’s forces push Russian troops to the pre-invasion borders and then seek to retake land that Moscow grabbed in the 2014 war, “I am pretty sure that there are some voices in Europe who say okay, you’re the bad guys now,” she said. “But we have to understand that it’s still their territories.”