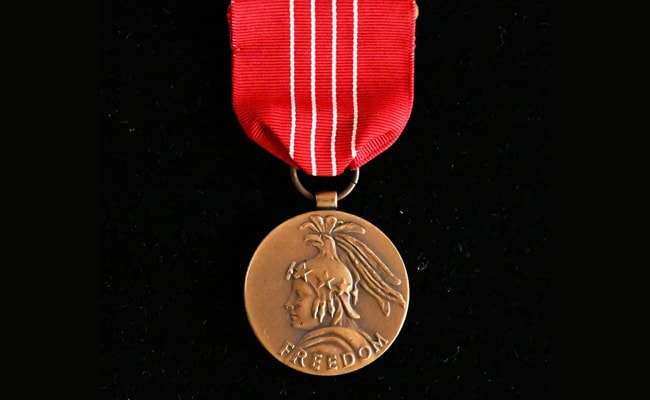 A Medal of Freedom awarded to a notorious mobster by then-US President Harry S. Truman is set to go under the hammer in California.

The honor — a forerunner to the prestigious Presidential Medal of Freedom — was bestowed by Truman on Meyer “The Little Man” Lansky in a secret 1945 ceremony.

Meyer was a leader of the National Crime Syndicate, a confederation of organized crime groups that was responsible for hundreds of murders in the 1930s and 1940s.

But it was for his role in “Operation Husky” during World War II that Lansky and his fellow gangster Charles “Lucky” Luciano were awarded one of the highest civilian honors in the United States.

The two mobsters passed information and contacts to Allied Forces during the 1943 invasion of Sicily, connecting advancing soldiers with high-ranking members of the Sicilian Mafia.

Introductions included to Calogero “Don Calo” Vizzini, a man sometimes dubbed “the boss of bosses” in the Cosa Nostra.

Vizzini helped lead the invading Allies through a difficult mountain pass, as well as providing maps that were key to the defeat in Sicily of Fascist Italy and Nazi Germany.

The medal, which is expected to fetch up to $60,000, is among a raft of mob memorabilia coming up for auction.

Personal items owned by Ben “Bugsy” Siegel are also on the block.

Siegel was a key figure in establishing the Las Vegas strip as we know it today, having overseen the opening of the Flamingo Hotel and Casino.

Hand-painted statues of flamingos — which are expected to fetch up to $3,000 — were gifted to VIPs on the 1946 opening night of the $6 million hotel, ushering in the era of luxury resorts.

The hotel was not, however, an immediate success, and its budget overshoot of $1 million aroused suspicion among other mobsters that Siegel had his hand in the till.

They shot him dead in 1947 at a luxury mansion in Beverly Hills owned by his moll, Virginia Hill.

The collection, which goes under the hammer at Julien’s Auctions in Beverly Hills on August 27 and 28, also includes Siegel’s original Smith and Wesson .38 CTG Revolver and a letter written by Al Capone while imprisoned at Alcatraz.

Other highlights include a collection of home movies from Anthony Spilotro, a member of the “Hole in the Wall” group of murderers and thieves who served as inspiration for Joe Pesci’s character in Martin Scorsese’s 1995 film “Casino.”

“From the good to the bad to the ugly, this fascinating collection of items taken out of the shadows and ripped from the headlines offers an intriguing look at America’s most infamous and colorful underworld figures of organized crime,” said Martin Nolan, executive director of Julien’s Auctions.

‘Grace and Frankie,’ ‘This Is Us’ and More

‘Only Murders in the Building’ Season 2: Everything to Know

‘Only Murders in the Building’ Season 2: Everything to Know