“Good To Be In Kyiv”: UK PM Boris Johnson’s Surprise Visit To Ukraine 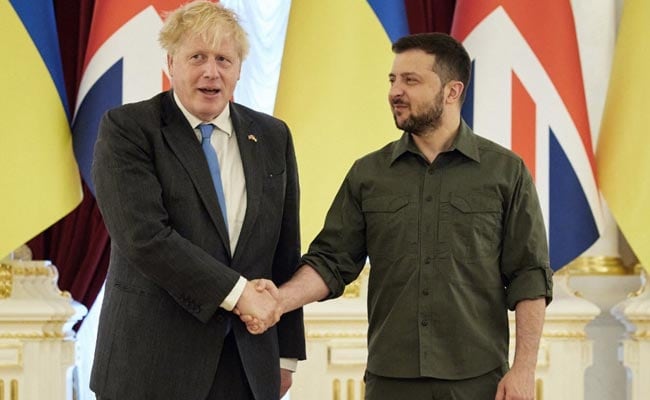 UK’s Boris Johnson became the first leader of a G7 country to visit Kyiv on April 9.

British Prime Minister Boris Johnson was back in Kyiv Friday on what was his second visit in just over two months, President Volodymyr Zelensky said, hailing Britain’s “resolute” support for Ukraine.

“Many days of this war have proved that Great Britain’s support for Ukraine is firm and resolute. Glad to see our country’s great friend Boris Johnson in Kyiv again,” he wrote on Telegram with a video of him greeting the British leader at the presidential palace.

“Mr President, Volodymyr, it is good to be in Kyiv again,” wrote Johnson on his official Twitter account.

The visit came a day after the European Union’s most powerful heads of state embraced Ukraine’s bid to be accepted as a candidate for EU membership, nearly four months into the Russian invasion.

It also came just hours after the European Commission threw its weight behind Kyiv being granted EU candidacy status in a move likely to be formalised at an EU leaders’ summit on June 23-24.

Such a move would be a potent symbol of support for Kyiv in its conflict with Russia.

Johnson became the first leader of a G7 country to visit Kyiv on April 9, two weeks after Russian troops had been driven back from the suburbs of the capital.

He was filmed on a walkabout through Kyiv’s deserted streets with Zelensky in a move acclaimed by Ukrainians for his show of solidarity, prompting the president to say Britain’s support for Ukraine would “remain forever in history”.

Which Water Filter Jug is Best For Your Home? Tested by Expert