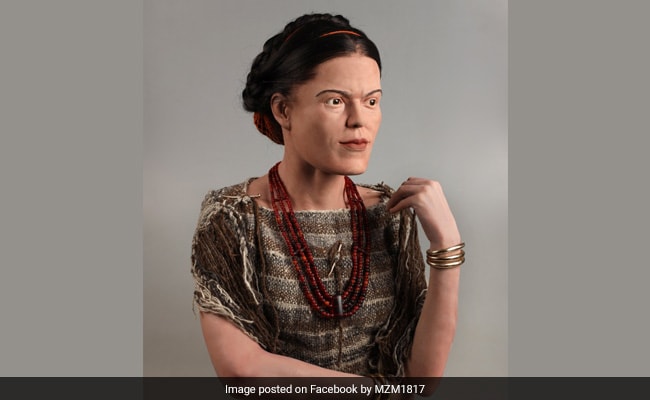 The woman was part of the Unetice culture.

Researchers from the Czech Republic have reconstructed the face of a petite, dark-haired woman who was among the richest resident of Bronze-Age Bohemia.

According to Moravske Zemske Muzeum, the woman was buried with two gold earrings, five bronze bracelets and a three-strand necklace with over 400 amber beads. Three bronze sewing needles were also placed along with her body in the tomb. The woman was part of the Unetice culture, a group of people from early Bronze Age Central Europe known for their metal artefacts, including axe-heads, daggers, bracelets and twisted-metal necklaces called torcs.

Speaking to Live Science, Michal Ernee, archaeologist, Institute of Archeology of the Academy of Sciences of the Czech Republic, said, “It’s maybe the richest female grave from the whole Unetice cultural region.” However, Mr Ernee also added that it is still unclear who the woman was.

According to the radiocarbon dating of the cemetery, the woman lived between 1800 BC and 1750 BC. Her graveyard was found near the village of Mikulovice in the northern Czech Republic, near the Polish border. Researchers informed that this area and the surrounding regions are known as Bohemia because they comprised a kingdom of that name prior to World War I.

Mr Ernee said that the skeletal remains of the richest woman provided the basis for reconstruction. Her bones were well preserved and contained the pieces of her DNA. The genetic sequences enabled researchers to discover that her eyes and hair were brown and her skin was fair.

To make the woman’s torso-up model, anthropologist Eva Vanickova of the Moravian Museum in Brno collaborated with sculptor Ondrej Bilek.

Now, according to Live Science, as ancient DNA was salvageable from other bones in the cemetery, researchers are working to find out how the individuals buried there were related. Experts believe that the cemetery could also provide new clues into regional differences in early Bronze Age Central Europe.

EU Turns To Israel For Gas Supplies After Russia “Blackmails”