Crew Of US Cargo Plane That Took Flight As Afghans Fell To Death Cleared: Report 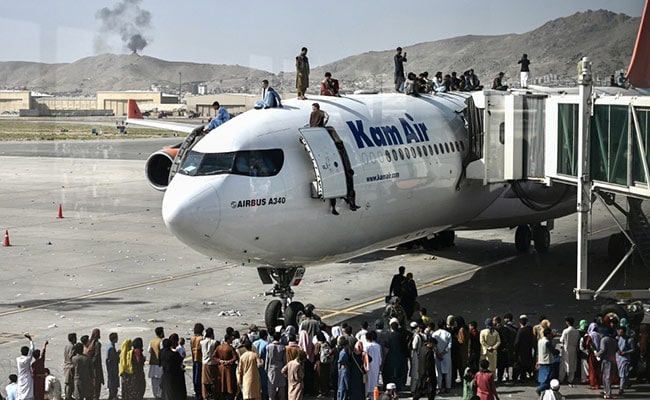 Huge crowd had surged onto the airport in Kabul, chasing US Air Force planes leaving from there.

The crew of a US military cargo plane that civilians desperately hung onto during the chaotic withdrawal of US forces from Afghanistan has been cleared of wrongdoing, the New York Times reported. Several Afghan citizens had plunged to their death while clinging onto last of the American planes that left Kabul and the country came under the control of Taliban in August 2021.

The C-17 cargo plane was one among those flights. It took off from Hamid Karzai International Airport in Kabul with people hanging onto its wings and body parts were later found in the wheel well of the plane.

But twin reviews of the incident revealed that the crew members who managed the Globemaster III were “in compliance with applicable rules of engagement,” Ann Stefanek, an Air Force spokeswoman, said in a statement.

Ms Stefanek said that the crew “acted appropriately and exercised sound judgment in their decision to get airborne as quickly as possible when faced with an unprecedented and rapidly deteriorating security situation.”

The reviews were conducted by the Air Force’s Air Mobility Command and United States Central Command, the NYT report said.

The probe was announced shortly after the incident on August 16 last year. It remains unknown how many people died in the tragic episode.

Video of the horrific incident, recorded by Afghan news media, were widely shared on social media. It showed stowaways looking like dots dropping from the plane.

In more videos from Kabul, a huge crowd surged onto the airport, chasing a US Air Force plane. The panic situation forced pilots and American soldiers were forced to make difficult decision on the spot.

Another C-17 plane had left Kabul with 640 people – more than double the estimated number – before the Afghans cleared by the US State Department swarmed the runway and tried to board the plane.

US troops had to fire warning shots into the air to prevent crowds running onto planes.