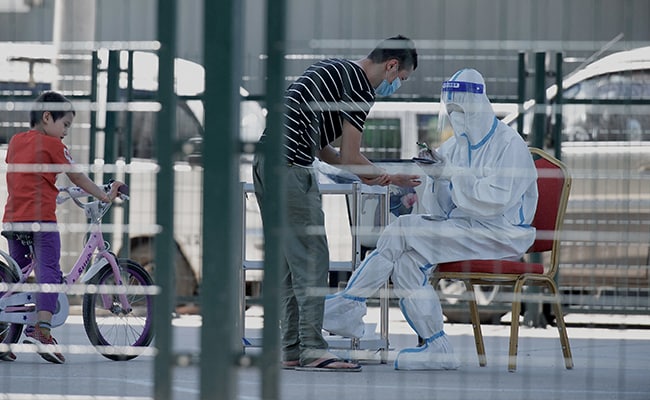 Most schools in Beijing delayed a reopening that was planned for Monday.

Beijing reported the highest number of daily Covid-19 cases in three weeks, with the capital moving to re-impose some restrictions just days after starting to ease them and appearing to avoid a broad lockdown like Shanghai.

The city recorded 74 infections for Monday, the most since May 22, when Beijing saw a record number of cases for the current outbreak. Vice Premier Sun Chunlan, the nation’s top official for pandemic control, urged Beijing to control the outbreak “as soon as possible,” the official Xinhua News Agency reported late Sunday.

After starting to ease pandemic restrictions in major Chinese cities, authorities have begun to walk back some of those plans as infections creep up again. Most schools in Beijing delayed a reopening that was planned for Monday, while all sports competitions were halted. Most districts in Shanghai suspended dine-in services at restaurants, with the financial hub reporting 17 cases for Monday, down from 37 on Sunday.

The Beijing city government said an outbreak linked to a popular bar is proving more difficult to control than previous clusters, in a weekend that saw mass testing and rising infections both in the capital and in Shanghai. The Chaoyang district in eastern Beijing, where the bar is located, began a three-day mass Covid testing drive from Monday.

While cases in Beijing and Shanghai are still below levels seen in late May, when stricter Covid restrictions were in place, authorities have been quick to re-impose curbs after earlier trumpeting their success in bringing the outbreak under control.

China’s Covid Zero approach, which included an unprecedented two-month lockdown of Shanghai and harsh restrictions elsewhere, has come at an enormous economic and social cost, and the recent flareup points to the difficulty in completely eliminating infections. The country continues to try and wipe out cases, even as other parts of the world accept the virus as endemic and open up their borders and economies.

Vice Premier Sun reiterated China’s Covid Zero principles, and said control measures should be quick, flexible, scientific and targeted, according to Xinhua. Beijing should create good conditions for the Communist Party congress to be held later this year, Sun was reported as saying.

Many China watchers have said the country is unlikely to ease its approach to Covid or open up before the congress, where President Xi Jinping is expected to get an unprecedented third term.