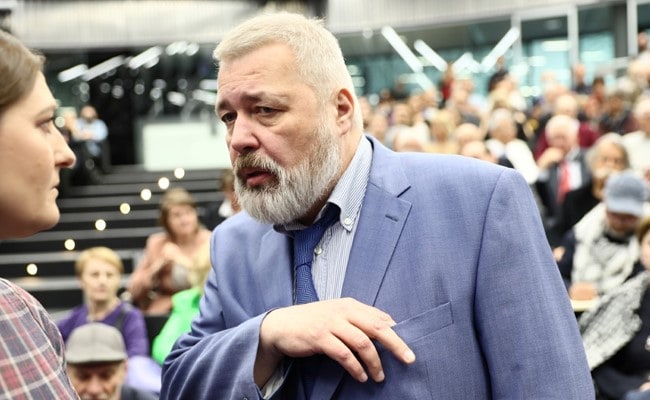 Nobel Peace laureate Dmitry Muratov is the co-founder and editor-in-chief of Novaya Gazeta.

Russian journalist and Nobel Peace laureate Dmitry Muratov is auctioning his Nobel medal for Ukrainian refugees, distraught at the eradication of independent media in his country, where he says fewer and fewer people support Moscow’s military campaign.

Muratov is the bear-like co-founder and long-time editor-in-chief of Novaya Gazeta, a newspaper critical of the Kremlin that was itself established in 1993 with money from former Soviet president Mikhail Gorbachev’s Nobel Peace Prize.

For years it defied tightening restrictions on dissenting media, but in March it finally suspended its online and print activities after it became a crime – punishable by 15 years in jail – to report anything on the conflict that veered from the government line.

“My country invaded another state, Ukraine. There are now 15.5 million refugees … We thought for a long time about what we could do … and we thought that everyone should give away something dear to them, important to them,” Muratov told Reuters in an interview.

Auctioning his golden medal would mean he shared in some way in the fate of refugees who had lost their mementoes and “their past”, he said.

“Now they want to take away their future, but we must make sure that their future is preserved … the most important thing we want to say and show is that human solidarity is necessary.”

Muratov’s medal is being sold by Heritage Auctions on June 20, World Refugee Day, with the support of the prize committee.

It had called the award to Muratov and Maria Ressa, a journalist from the Philippines, an endorsement of the right to free speech that was in jeopardy around the world.

Muratov dedicated his prize to six Novaya Gazeta journalists murdered for their work, among them some of the highest-profile critics of President Vladimir Putin.

He lamented the lack of a free media, and the severity of the state’s crackdown on protest.

“There are no free media outlets. Rallies are actually banned, including in the regions. For any statement, an administrative or criminal case is initiated.

“Independent journalism is impossible in modern Russia. Content delivery is possible, for example, through the YouTube platform. It is possible to deliver some content – alternative to the state view – through VPN services. But this is getting more and more difficult every day.”

Nevertheless, he questioned research indicating that most Russians support the invasion.

Muratov believes that in reality, support for the war, often shown by a display of a ‘Z’ from the Latin alphabet, is dwindling.

“If you walk through the streets of Moscow now, you will see that there are practically no ‘Z’s left on the streets.”

Moscow says it sent troops into Ukraine to defuse a military threat and protect Russian-speakers from persecution, assertions that Kyiv and its Western allies say are a baseless pretext for an unprovoked war of acquisition.

“I see what people say to me in the streets,” Muratov said. “I see what our readers are writing, and I understand that it’s impossible to say Russia supports the invasion of Ukraine with one voice.”

He said even the Kremlin acknowledged that 25-30% of the population that did not support the operation.

But Muratov said those who believed change may occur in Russia as a result of a split in the elite were mistaken.

He also questioned suggestions that Russians might turn against the authorities if their standard of living suffered from Western sanctions, saying they were more likely to evoke the ‘can-do’ spirit of those who survived the privations of World War Two.

“Russia has arrived at the point where Russian President Putin will remain in power for as long as he sees fit – as he sees, it for the good of Russia. Whether he will be president or some kind of monarch, I don’t know. But the tendency towards absolutism is absolutely obvious.”

Asked how much he expected the medal to raise, Muratov said he had heard forecasts of $2 million or more, but had no real idea:

“The finale will be as unexpected for me as it is for you.”