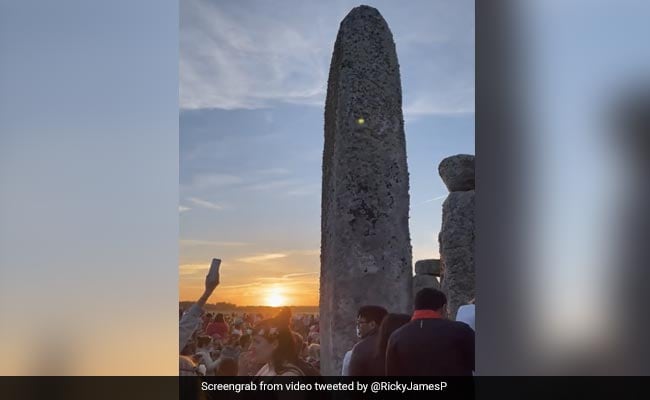 Summer solstice 2022: Nature lovers flocked in their thousands to the site.

Crowds gathered at Stonehenge in the united Kingdom to watch the sunset ahead of the summer solstice. Also called the longest day of the year, the event marks the beginning of the summer seaon in Northen Hemisphere.

The video showing the sunset was shot on June 20 by Ricky Parbery, who said it was “such a fun time”, and made available by Storyful.

Such a fun time for Summer Solstice at Stonehenge 🤩 pic.twitter.com/QP4KjEHvk4

According to The Guardian, “pagans, healers, nature lovers and party-goers” flocked in their thousands to the site for sunrise on Tuesday, after COVID-19 restrictions had impacted festivities in 2020 and 2021.

The summer solstice marks the return of brighter evenings as it is the longest period of sunlight. For those in North America, this astronomical event started on June 20 at 10:32 pm Central Daylight Time (CDT) while for the rest, it began on June 21, 2021, at 03:32 UTC.

At this exact moment, Earth’s North Pole is tilted closest to the Sun, making it appear at its highest point in the sky this year.

When our planet’s orbit reaches the point where the North Pole is at its most inclined toward the Sun, it is exactly over the Tropic of Cancer at this moment. Because the Sun goes farthest north in the sky around the solstice, the days leading up to it have the longest daylight of the year.

Solstices happen due to the Earth’s tilt. At the dawn of our solar system billions of years ago, the Earth got tilted on its axis due to random collision with other rocks. This gave us solstices, equinoxes, and seasons.

According to Earthsky, as the Earth rotates around the Sun, the northern and southern hemispheres alternatively receive the Sun’s light and warmth every six months. The Earth is tilted on its axis by roughly 23.4 degrees relative to the plane of its orbit, which is why we get solstices.

Since ancient times, people have elaborately observed the summer solstice. People used the day to organise calendars and farmers marked the day with sowing or harvesting of crops. Many historians say that Stonehenge, a prehistoric monument in England believed to be 4,500 years old, is an evidence of humans using June Solstice as a way of setting the time of the year. Even now, tourists and locals visit Stonehenge to watch the sunrise on summer solstice.