US Urges “Accountability” In Brazil Over Killing Of UK Journalist, Expert 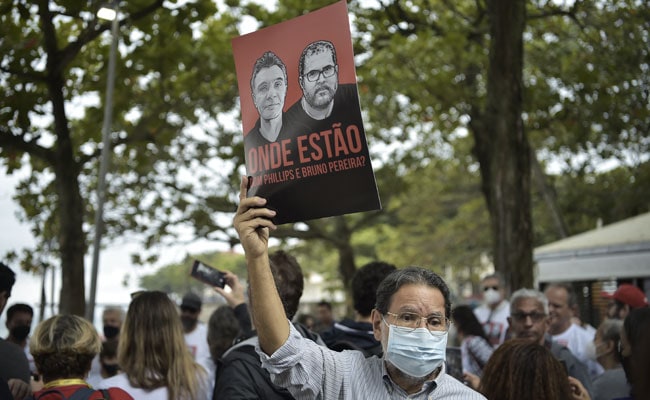 The UK journalist and an indigenous expert were last seen early on June 5 in Brazil’s Amazon region.

The United States on Friday urged accountability over the murder in the Brazilian Amazon of a British journalist and an Indigenous expert, as it hailed defenders of the rainforest.

State Department spokesman Ned Price offered condolences to the families of journalist Dom Phillips and his expert guide Bruno Pereira, saying they were “murdered for supporting conservation of the rainforest and native peoples there.”

“We call for accountability and justice — we must collectively strengthen efforts to protect environmental defenders and journalists,” Price wrote on Twitter.

The killings were confirmed days after President Joe Biden held a first meeting with his Brazilian counterpart Jair Bolsonaro, who has faced criticism over the episode.

Activists say that Bolsonaro has sacrificed law and order in the Amazon as he pushes commercial expansion.

Bolsonaro appeared in an interview to blame the missing men for undertaking a “reckless” trip in an area where Phillips was “disliked.”

An ally of former president Donald Trump, Bolsonaro nonetheless appeared upbeat after meeting Biden on the sidelines of a summit in Los Angeles a week ago.

Biden during the meeting voiced concern about climate change and deforestation in the Amazon, a vital “sink” for the planet’s carbon.

Brazilian police said that the killers of Phillips and Pereira acted alone and were not part of a criminal group, an assertion rejected by Indigenous leaders.

‘Because I Said So’ Cast: Where Are They Now?

Everything Know About the Movie

Everything Know About the Movie