Tired of Buying New Shoes, Man Gets A Pair Tattooed Onto His Feet 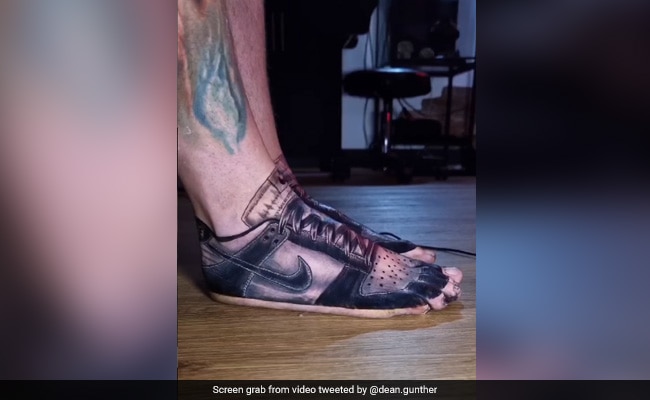 The video of the tattoo art has close to one lakh views and 972 likes.

A man who got tired of paying for new shoes to replace the worn-out ones got them tattooed them onto his feet. The video of the art has been shared on Instagram by tattoo artist Dean Gunther, where it is attracting eyeballs.

Mr Gunther, originally from South Africa and based in Manchester, revealed in the Instagram post that the customer wanted the design of his beloved Nike trainers inked onto him.

“He was tired of paying for shoes every few months, so he got his favourite @nike shoes tattooed on for life!” Mr Gunther said in his Instagram post.

The video has close to one lakh views and 972 likes.

The piece took Mr Gunther around two hours to draw and another eight hours to tattoo onto both feet.

Instagram users found the idea funny as well as innovative.

“Save a fortune on trainers,” said one user. “Wow brave man both feet,” commented another.

Some users wanted to know if the procedure was painful. “Would not wanna walk a mile in his shoes,” one of the comments on the post said.

Mr Gunther caught the attention of social media last month too when he posted a video of an innovative way to quickly “get” six-pack abs.

The video showed an unidentified man who had been dreaming about six-pack for a long time, but didn’t like the idea of working out. So, he turned to Mr Gunther who gave him a tattoo of six-pack abs.

Mr Gunther moved to the UK five years ago and opened his own studio in Greater Manchester called DG Tattoo art.

“Brussels, We Are Waiting”: Ukraine On Western Weapons’ Supply Amid War

The Best 5 Simple tips for Weight Loss Exercises at Home

The Best 5 Simple tips for Weight Loss Exercises at Home