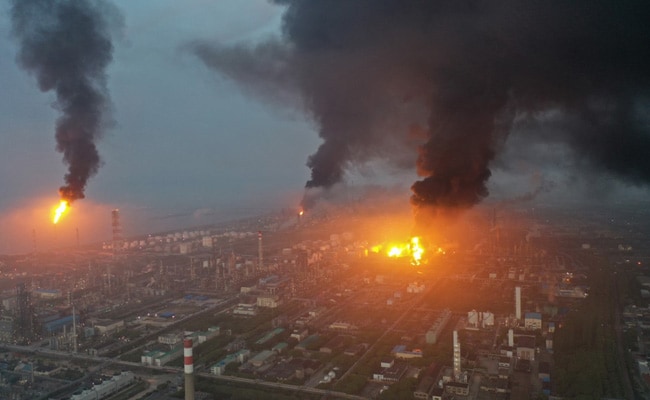 Shanghai Chemical Plant Fire: The fire was brought under control within hours.

Shanghai authorities on Saturday announced an investigation into a massive chemical plant blaze that left one person dead and another injured in the first major industrial accident since the city lifted lockdown in early June.

The fire at a Sinopec Shanghai Petrochemical Co. plant in outlying Jinshan district broke out at around dawn on Saturday, and was brought under control within hours, according to state news agency Xinhua.

“At present, on-site disposal work is being implemented in an orderly manner, and protective combustion is being carried out,” the Shanghai government said on social media, adding that “safety risks” were “controllable”.

“Monitoring data … show that the air quality has basically returned to normal.”

The Shanghai government added that its emergency management bureau has launched an investigation into the cause of the accident.

The company said in a separate Weibo post Saturday afternoon that it would cooperate with the investigation, and that the closure of relevant facilities “will not have a significant impact on the market”.

The person who died was a “third-party transport vehicle driver” and an employee was suffered minor injuries, the company said.

The refinery is located near the south Shanghai seafront and a wetland park. The company said it was conducting environmental monitoring of the nearby area.

“At present, no environmental impact on the surrounding bodies of water has been found,” it said.

The fire erupted as Shanghai, China’s industrial engine and most populous city, gingerly resumes business after being sealed off for around two months to counter a coronavirus outbreak driven by the Omicron variant.

While the lockdown was officially lifted at the beginning of June, the snarling of supply chains and shutting of factories continues to have far-reaching consequences for the global economy.

At the petrochemical plant, an early morning explosion was heard by residents up to six kilometres (four miles) away, according to local media.

One person said that tremors from the explosion caused their apartment door to shake violently.

“Half the sky was full of red fire and thick black smoke, there was dust and cotton-like things floating in the air,” the anonymous resident told Chongqing-based newspaper Upstream News.

“The sound of burning could be heard — a huge roar like the sound of a plane in flight.”

Images on social media showed a large cloud of fire and ash billowing upwards behind rooftops.

The Shanghai fire department said on Weibo that it had dispatched more than 500 personnel immediately after the incident occurred.

The Ministry of Emergency Management had also dispatched an expert group to the scene, state-run CCTV reported.