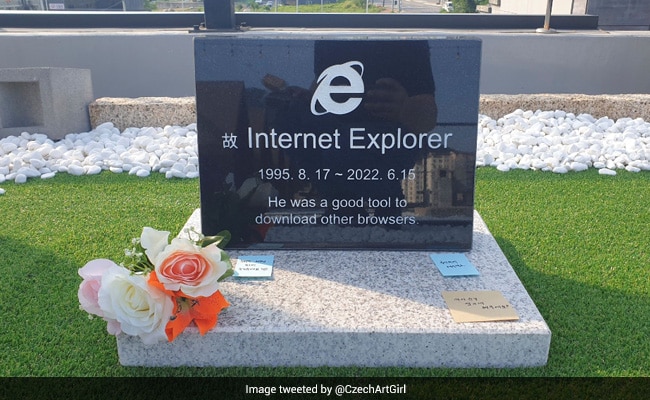 A South Korean engineer built a gravestone for the Internet Explorer, the web browser retired by Microsoft this week, and its photos is now gaining traction on social media.

According to The New York Post, a photo of the gravestone has gone viral after it was shown in a cafe run by his brother in the southern city of Gyeongju.

South Korea, which has among of the world’s fastest average internet speeds, has remained bizarrely tied to Internet Explorer, which was retired after 27 years of service.

Microsoft announced on Wednesday that it will no longer support Internet Explorer, the once-dominant browser that billions of internet users had love-hate relationship with, the Post report said.

Engineer Kiyong Jung built a gravestone with the browser’s signature ‘e’ logo on the rooftop of a café in Gyeongju, South Korea. He spent $330 on the gravestone to commemorate the browser’s demise.

Picture of the gravestone has been widely circulated on social media. “He was a good tool to download other browsers,” the inscription on the gravestone reads.

According to news agency Reuters, Jung’s tribute represented his mixed sentiments about the software, which had played such a significant role in his professional life.

“It was a pain in the ass, but I would call it a love-hate relationship because Explorer itself once dominated an era,” he told Reuters.