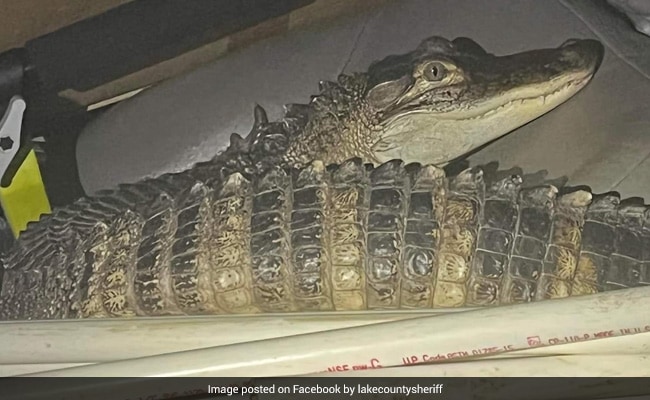 The passenger, “Karen” the alligator, attempted to flee the scene but was taken into custody.

The police in the United States found an ‘unusual’ passenger inside a car they were chasing in Michigan on Saturday. The driver had jumped traffic light late at night and tried to escape in high speed, according to update posted by Lake County Sheriff’s Office on Facebook.

The police cars soon started chasing him but found an alligator named ‘Karen’ inside the car. The incident took place on June 6.

The department shared a clip of officers discussing how to grab Karen from the scene. The little alligator sitting inside the car can be seen in another photo on Facebook on Monday.

On Saturday 6/11 at approximately 11pm, a Lake County Sheriff’s Office patrol sergeant was patrolling US-10 when he observed a vehicle traveling at a high rate of speed,” reads the caption.

According to the post, when a traffic stop was initiated, the car did not stop, it escaped. It led deputies and Michigan DNR law enforcement on a short chase that ended with the vehicle stuck between two trees on the Rails-To-Trails pathway near S. Forman Rd in Webber Township.

The driver, a 40-year-old male from Oak Park, was taken into custody and is now facing several charges. He also had many criminal records from another jurisdiction.

The passenger, “Karen” the alligator, attempted to flee the scene, but was taken into custody. “Karen is not facing any charges at this time. We believe she was an unwilling participant during the incident, nor do we believe she was ever in control of the vehicle,” the post further said.