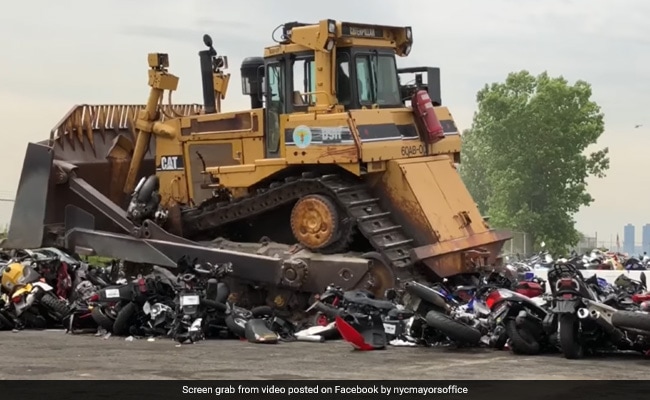 92 of the illegal rides were pulverised under a bulldozer.

A video shared by the Mayor’s office on Facebook shows 92 of the illegal rides being pulverised under a bulldozer at the Erie Basin Auto Pound in Brooklyn. The short clip also shows the bulldozer getting about halfway through the line before needing to reverse and unstick a pesky motorcycle before charging back down to finish the job.

Watch the video below:

According to New York Post, Mr Adams waved a checkered flag, prompting a waiting Department of Sanitation driver to hit the gas on the bulldozer and crush the pile of ATVs and other illegal vehicles. Speaking at the press conference, the mayor lauded the NYPD for completing the “Herculean task” of getting rid of the “loud, intimidating and dangerous and illegal dirt bikes and ATVs” that are on the streets of New York.

“For years, we’ve witnessed what happens when they go under control or we do not enforce. They continue to grow over and over and over again. And I’m not going to give up on my promise and commitments to rid our streets of these bikes and make all of our boroughs a place where people can move about,” he said. “As you can see from the number of bikes here today, we are making good on our promise,” Eric Adams added.

Further, he went on to inform that the NYPD has taken around 900 of the bikes and ATVs off the streets so far this year. He even explained that the city chose to destroy the dirt bikes rather than sell or donate them because it keeps them off the street permanently.

Mr Adams stated that many of the bikes don’t have insurance and said that he is pushing for ATV dealers to request proof of insurance and registration documents before selling the two-wheelers.

Authorities are hoping to rid the New York streets of illegal bikes but also to raise public awareness about the serious consequences of riding them.

9 Tips to Fly with Frontier Airlines an Affordable Deal