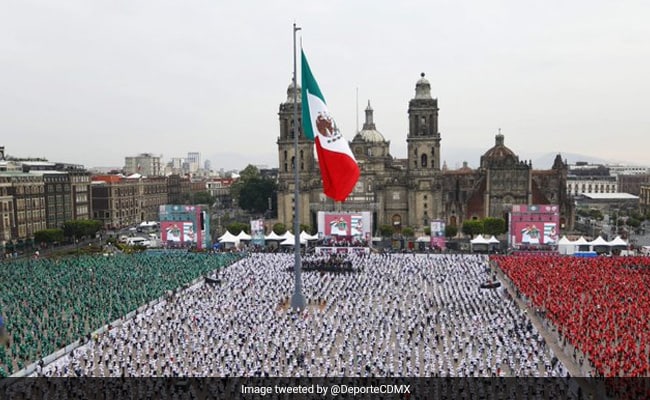 A huge gathering is seen during the biggest ever boxing class in Mexico City.

Mexico City has set a world record for hosting the largest boxing class ever, with 14,299 people taking part in a massive lesson in the capital’s central plaza. Photos from the event went viral on social media and showed the participants dressed in green, white, and red t-shirts that represented the colours of the Mexican flag.

The huge turnout easily surpassed the previous record, set in Moscow in 2017 when 3,000 people showed up for boxing class. A Guinness World Records team certified the attendance figure.

Mexico City’s Mayor Claudia Sheinbaum posted a video on Twitter thanking “the champions and those who made this great triumph possible.”

Hundreds of people had gathered early for the enormous class in Zocalo plaza, which began with a tai-chi warmup, followed by a review of basic boxing movements and then practice in various combinations of blows.

Carmen Perez, 16, an urban dance devotee, said she was thrilled to take part.

“There is a very beautiful energy – very joyful, a lot of joy,” she told news agency AFP.

The event was organized by the Mexico City government, which had recruited such prominent figures as American actor Sylvester Stallone – Rocky Balboa on the big screen – and boxer Saul “Canelo” Alvarez to promote it.