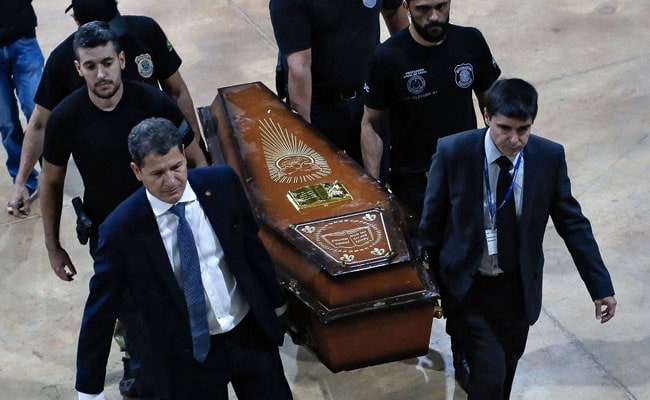 Human remains unearthed from the site arrived in Brasilia on Thursday evening for identification.

Brazilian police on Friday officially identified the remains of British journalist Dom Phillips, who was found buried in the Amazon after going missing on a book research trip.

The grim result comes after the disappearance on June 5 of Phillips and his guide, indigenous expert Bruno Pereira, ignited an international outcry, with the United States calling Friday for “accountability.”

Phillips was identified through “forensic dentistry combined with forensic anthropology,” the Federal Police said in a statement.

It said it was still working on “complete identification” of the unearthed remains, which may include those of Pereira, who had received multiple death threats.

Veteran correspondent Phillips, 57, and Pereira, 41, went missing in a remote part of the rainforest rife with illegal mining, fishing and logging, as well as drug trafficking.

Ten days later, on Wednesday, a suspect named Amarildo da Costa de Oliveira — known as “Pelado” — took police to a place where he said he had buried bodies near the city of Atalaia do Norte, where the pair had been headed by boat.

Human remains unearthed from the site arrived in Brasilia on Thursday evening for identification by forensics experts.

Earlier Friday, police said investigations pointed to the perpetrators having “acted alone, without there being an intellectual author or criminal organization behind the crime.”

“The investigations continue and there are indications of the participation of more people” in the murders, it added.

Activists have blamed the killings on President Jair Bolsonaro for allowing commercial exploitation of the Amazon at the cost of the environment and law and order.

For his part, Bolsonaro sought to lay blame at the door of the men themselves for undertaking a “reckless” trip in an area where Phillips was “disliked.”

Phillips, a longtime contributor to The Guardian and other leading international newspapers, was working on a book on sustainable development in the Amazon with Pereira as his guide.

Pereira, an expert at Brazil’s indigenous affairs agency FUNAI, had received multiple threats from loggers and miners with their eye on isolated Indigenous land.

The Univaja association of Indigenous peoples, which had taken part in the search for the men, refuted the police’s conclusion that the killers had acted alone.

“These are not just two killers, but an organized group that planned the crime in detail,” Univaja said in a statement.

It claimed authorities had ignored numerous complaints about the activities of criminal gangs in the area.

Univaja said it had filed a report in April that “Pelado” was involved in illegal fishing.

He had previously been accused, it claimed, of “being the perpetrator of gun attacks in 2018 and 2019 against a base of FUNAI,” the organization Pereira had worked for.

Univaja said that “a powerful criminal organization (had) tried at all costs to cover its tracks during the investigation” of the double murder.

Experts say illegal fishing of endangered species in the Javari Valley takes place under the control of drug traffickers who use the sale of fish to launder drug money.

Police said Friday night they have issued an arrest warrant for a man identified as Jeferson da Silva Lima. It is not known how he is linked to the case.

Heavily armed soldiers who had taken part in the search for the two men started leaving Atalaia do Norte Friday.

People there who helped in the search and reported illegal activity are now afraid for their lives, said Paulo Marubo, an Univaja coordinator.

“We are going to keep living here, and the state is not going to give people any kind of protection,” said Marubo, who says he has received threats.

The United States on Friday urged “accountability and justice” for the murders.

State Department spokesman Ned Price offered condolences to the men’s families, saying they were “murdered for supporting conservation of the rainforest and native peoples there.”

In neighboring Peru, an estimated 100 Indigenous people in traditional dress marched in Lima Friday to demand protection for natural resources on native lands and lament the death of Phillips and Pereira.

“The blood that has been spilled will never be forgotten,” the group chanted as it marched to the Justice Ministry. People at the head of the procession carried a banner reading “protect land, water and life.”

On Thursday, the UN denounced a “brutal act of violence” in Brazil.

UN human rights spokeswoman Ravina Shamdasani said attacks and threats against activists and Indigenous people in Brazil were “persistent” and urged the government to step up protections.

Investigations continue to look into the motive for the crime.

Police have been unable to find the boat in which Phillips and Pereira were traveling when they were last seen.

Blood found in Oliveira’s boat belonged to a man, investigators said, but not to Phillips.

Analysis had also revealed that entrails found in the river during the search, and linked to the men by Bolsonaro, contained “no human DNA,” according to police.