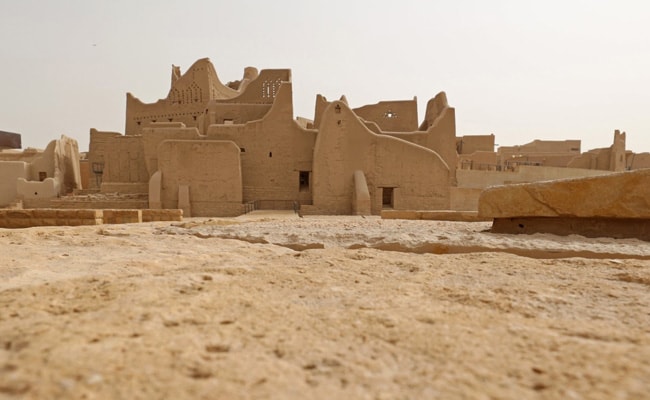 Diriyah was the family’s original power base.

Saudi tour guide Nada Alfuraih ushers guests through an 18th-century palace built from mud and straw, the very site where the kingdom’s royal family is said to have first plotted its conquest of the Arabian Peninsula.

Pausing in an airy assembly hall, she raves about this aspect of her country’s origin story. Her only regret is that today, nearly 300 years later, some young Saudis seem unaware of it.

“I meet visitors who have no clue. They must have skipped this part of their education or something,” she told AFP.

Later this year, the restored palace, in the historic district of Diriyah on the outskirts of the Saudi capital Riyadh, will open to the public for the first time.

Analysts say it is part of a larger effort by Crown Prince Mohammed bin Salman — who was made first in line to the throne five years ago next week — to both stoke Saudi nationalism and reframe Saudi history.

Exhibits dotted throughout the palace spotlight the Al-Saud family’s achievements going back well before the kingdom’s official founding in the 1930s.

At the same time, they make no mention of its partnership with Mohammed bin Abdul Wahhab, the fiery cleric who lived nearby and championed a purist form of Islam known as Wahhabism. That storied alliance has long fuelled the kingdom’s hard-line image.

Instead, the new Diriyah features attractions more in line with Prince Mohammed’s vision of a modern Saudi Arabia opening up to the world: fine dining, art galleries — even a Formula-E race track.

“Diriyah perfectly encapsulates the new Saudi nationalism,” said Kristin Diwan of the Arab Gulf States Institute in Washington, who has studied its development.

“It puts the Al-Saud front and centre as the primary authors of Saudi history and architects of Saudi unity, while erasing Mohammed bin Abdul Wahhab from the national narrative.”

She added: “The change isn’t subtle, it’s really in your face.”

While the country that bears the Al-Saud name is just 90 years old, the family dynasty traces its origins to the 1700s.

Diriyah was the family’s original power base and the place where, in 1744, it sealed its pact with Abdul Wahhab, whose doctrine spread through the power of the sword.

Rapid expansion followed, but the family would be toppled twice before Abdul Aziz bin al-Saud established the current Saudi state, declaring himself king in 1932.

Oil was struck six years later, eventually transforming the kingdom into one of the world’s richest nations.

Through it all, historical ties with Abdul Wahhab conferred legitimacy on the rulers of a country that boasts Islam’s two holiest sites, Mecca and Medina.

When Prince Mohammed’s father, King Salman, first showed interest in redeveloping Diriyah in the 1970s, he “preserved a place, albeit reduced, to commemorate” the cleric, Diwan said.

But Prince Mohammed, now Saudi Arabia’s de facto ruler, has overseen a sidelining of religious authorities, most prominently the stick-wielding religious police who used to chase men out of malls to pray.

As for Diriyah, he “sees it as a global attraction”, Diwan said. “And in his programme of arts biennales, world wrestling and raves, Wahhabism doesn’t easily co-exist.”

The man hired to bring this new Diriyah to life is Jerry Inzerillo, an entertainment executive from Brooklyn who had a cameo in the 2006 James Bond film “Casino Royale”.

In an interview with AFP, Inzerillo talked up Diriyah’s potential, saying it could be for Saudis what the Acropolis is for Greeks and the Colosseum is for Italians.

“There was a generation that said, ‘Oh, it’s just a bunch of mud houses and that’s not our future,'” he said.

“But this king believes that the national identity and the ongoing source of pride has got to be in a rich Saudi past.”

The same thinking, he said, was behind a new Founding Day holiday inaugurated in February that honours the Al-Saud family’s Diriyah-era leaders.

Asked about Prince Mohammed’s role, Inzerillo said he “approves every rendering” of Diriyah and had personally spent up to 30 hours painstakingly reviewing its street layout.

Inzerillo dismissed the idea that Abdul Wahhab was being written out of history, saying “there will be a celebration of him” along with other imams.

Yet opposite the old palace, the Bujairi area where Abdul Wahhab once lived has been transformed into an upscale dining district — just one of many entertainment highlights.

A restored version of Abdul Wahhab’s original mosque is still open on the site but a research centre, built about seven years ago and devoted to his branch of Islam, is not.

The palace itself features zones for historical re-enactment, sword-dancing, falconry and horse shows.

Elsewhere in Diriyah, venues have already hosted concerts by Pitbull and the Swedish House Mafia and the 2019 “Clash on the Dunes” heavyweight boxing match between Anthony Joshua and Andy Ruiz.

Developers have been mindful not to turn Diriyah into “a theme park”, Inzerillo said, though he added that, in his view, heritage and entertainment are “highly compatible”.

“Diriyah 300 years ago had music. It had the best musicians in the area. It had art, it had painters… What happens is that if a society is going to be fulfilled and happy, it has to be entertained,” he said.

“There’s not a vulgarity to entertaining.”